The problem of maximal matching is that there are often ambiguities. Chen and Liu (1992) proposed a set of disambiguation rules for maximal matching. The first rule says that, the most plausible segmentation is the three word sequence with the maximal length, for example,

is a string where the dictionary contains:

It is an ambiguity in deciding how to segment the string headed with A. If we consider all the possible segmentation for the first three words, they are

Then, the longest chunk is AB CDEF GH and we pick AB as the first word in the segmentation. The process continues in a recursive manners.

However, if the dictionary contains:

then we have two longest chunks:

The second rule of Chen and Liu proposes to pick the one with smallest SD in the word length. The first one has word lengths of 2, 4, 2 while the second one is 3, 2, 3. So it picks the second one. This rule is based on the heuristic that word length are usually evenly distributed.

Actually, there are four more rules in case the last two rules:

Tsai implemented Chen and Liu’s algorithm in his MMSEG. However, only the first two rules are implemented because the word frequency are not included in his lexicon.

Also known as Laplace’s Law, is to give every entry of the language model (i.e. corpus data) a base count of one and then add the counted frequency from training data. The data is then normalized to give the probability. In other words, the probability \(p\) of word \(w\), with \(c\) counted occurrences in the training data of size \(N\), is given by \(p=(c+1)/(N+V)\), where \(V\) is the total number of distinct words in the model. Hence every unknown word has probability of \(1/(N+V)\).

Add-one smoothing does not provide good result because of the sparse nature of the language model, i.e. \(V\) is very large. Hence the probability is distorted a lot for frequent terms because of the normalization.

Use the items that we saw once to estimate the probability of unseen terms. The items that occurred once is called a singleton or hapax legomenon.

Good-Turing discounting will give probability of zero occurrence terms similar to that of a singleton.

and \(\alpha\) is the normalizing factor, which is

POS tagging in English text is commonly done by HMM.

In Low et al (2005), it proposed the use of maximum entropy to perform segmentation. The idea is to identify the beginning and ending of a “word” by considering the contextual clues. It relies on a large corpus which tells what is a word in Chinese text. It tags the beginning character of a word by “L” and the ending character by “R”, while all the middle characters are tagged with “M”, if any. Then, a word can be identified if we can also do the similar thing on the inputted text. See (Xue and Shen, 2003).

It is a learning algorithm, such that the corpus teaches how the words shall be tagged. The corpus not only tells about the correct tagging, but also the other “features” that assists the tagging. All these kind of information is then feed into a maximum entropy model which uses the EM algorithm to deduce the optimal parameters. This is called the training process. The trained model is then used for the subsequent segmentation.

However, there are four problems with this approach: (1) The features extracted may affect (lead or mislead) the model; (2) The corpus has to be very large and hundred percent correct to make a perfect model; (3) Training takes a long time; (4) There could be strange results: it is not necessarily know L→M→R is a fixed sequence and R→M→L is not allowed, because the tagging is character by character based on context clues only.

Lau and King (2005) proposes a two-stage training to avoid a very large corpus: Train the model with just half of the corpus and use this trained model to tag the second half of the corpus. Mistakes are expected but we compare the mistaken tagging with the correct one and train the model again with the tagged result as additional features. The double-trained model can produce results more accurately.

I think it is OK for problems (1)-(3) exist. However, problem (4) means the system is not tagging correctly (in the sense that it is illogical to have such tagging result). Any solution for this? May be we should build a Markov chain to tell that R→M is impossible.

Actually, \(n\)-gram can help doing Chinese segmentation, for example, an algorithm is described in a blog entry 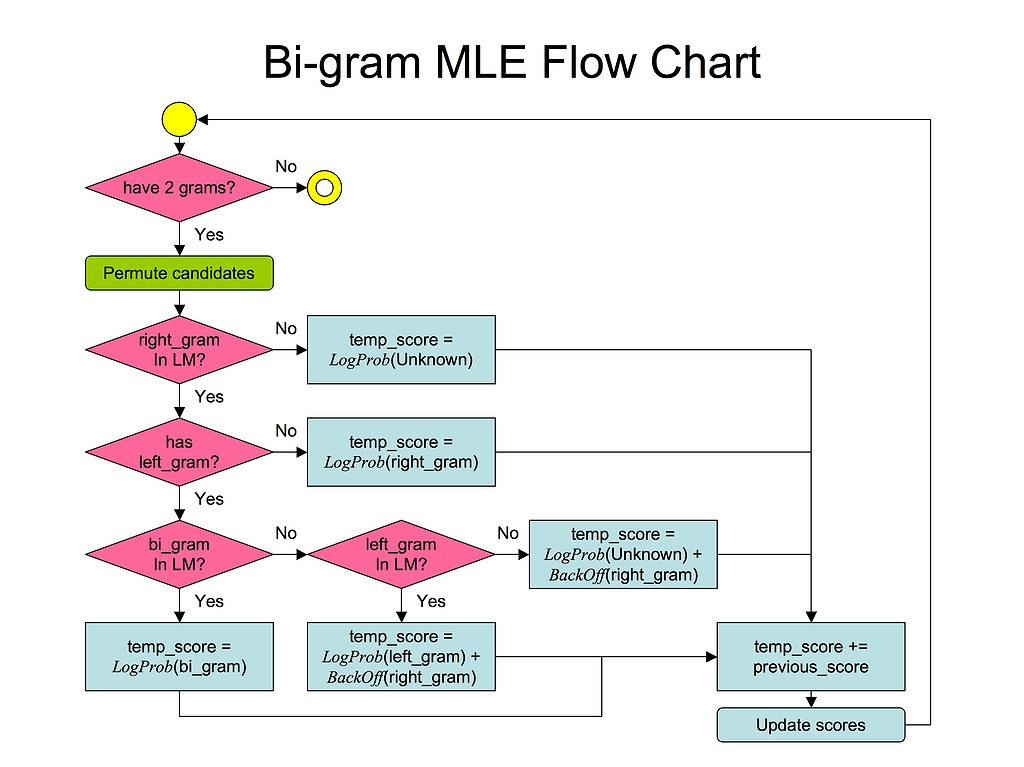 The above is the flow chart about the algorithm. The segmentation is done as a dynamic programming problem:

The above code employs a smoothing algorithm for estimating the probability of unknown \(n\)-gram. The most popular one is the Katz’s algorithm.

My comment: The \(n\)-gram model is actually a union of the unigram, bigram, trigram, quadrigram, pentagram, etc. Hence the probability should not be comparable between. I wonder whether the above algorithm favors single-character segmentation, because of the smaller cardinal size of unigram than other \(n\)-gram.

Smoothing \(n\)-gram means to fill-in the probabilities of unseen entries besides those evaluated from the training data.